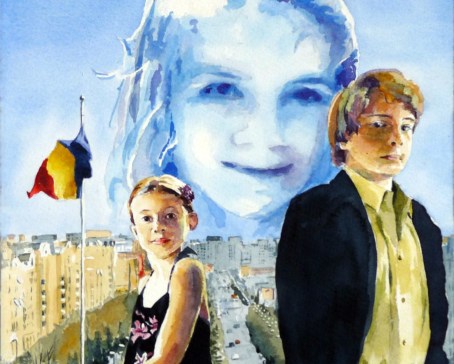 In a new episode of XIII, two secret agents wish you a happy new year from the house of the people 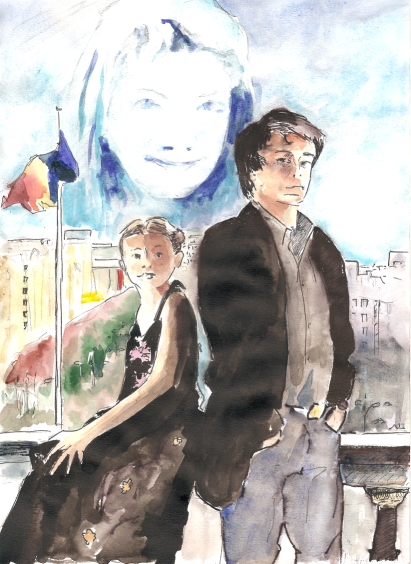 Gauthier and Loriane are perched on the balcony of Casa Poporului, Gabrielle appears in the clouds.

I do a sketch with paper pencil, after installing and Loriane Gauthier. They act as mysterious characters, more photos are needed to find the smile of the spy-boy, but our spy-girl finds her character from the very first minute.

The characters are slightly cons-diving, and stand out from the perspective of Unirii Avenue, bathed in the morning sun, ie a sky light on the horizon, and buildings that pass through the shadow from left to right of the painting.

The pencil is nice, but does not allow me to see if the composition will work the way I want. Then I leave a marker to highlight the features of the characters ... Then the ink, because I want to paint a figure a kind of backlight ... And watercolors, because the color is essential to make the brightness ...

It's quick, but it's nice to stay dynamic and intuitive... 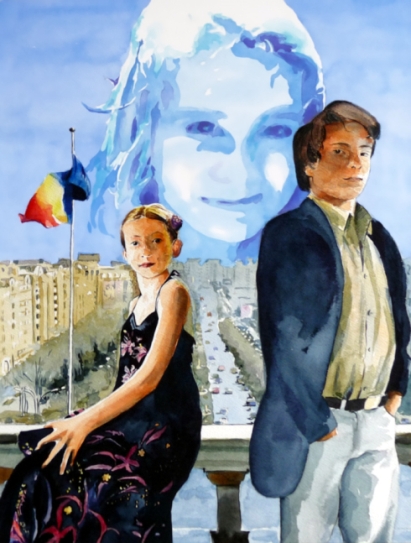 I took the sketch on the computer to test various compositions. But ultimately, I brought few changes, except separating the characters from the foreground.

Painting clear blue sky is not so easy, I applytwo successive glazes. I paint the face of Gabrielle in monochrome, but in the end, I went too far in contrasts.

Then the scene: the flag should detach from gold to gray buildings, silhouettes and vehicles are passing through the avenue. The decor should suggest without capturing the eye, that's why I stick to very neutral colors, mainly working with sienna and cobalt blue, darkened with Payne gray.

Finally, the characters: from my first sketch, I keep the idea of ​​a high-contrast clothing, highlighted by the black dress and jacket.

The sunlight reflects on both sides, in a sort of backlight.

For a few days, I am thinking about the result: did I express what I wanted to?

I'll have to do a complementary study to improve the painting of the faces. 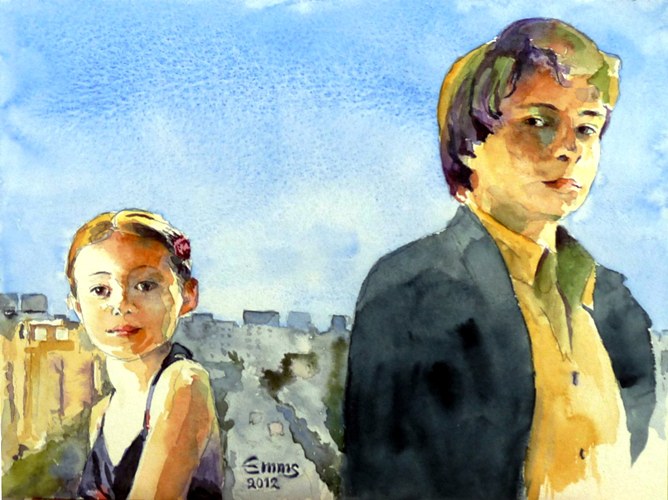 I start with a study of the faces, making portraits of a larger size (24X32 cm) to have enough space for expression.

Faces must be asymmetric and coloured, with some kind of backlight, meaning sad colors like blue or green.

I keep a large space in blank, in comparison with my previous test, and bring contrasts very gradually. The mouth and eyes are painted only at the end.

The painting of each portrait takes about 30 minutes long, almost the same for the sky and background. 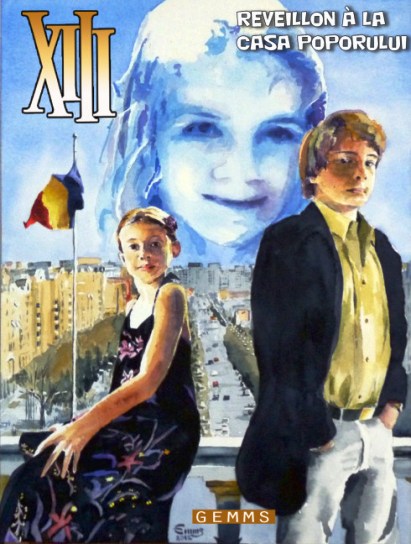 Once the study is validated, I start the picture. The glaze is applied in one step, wet paint on wet paper. A large brush discharges the paint applied in horizontal applications, from top to bottom.

This technique clears the sky at the horizon, it is very simple, but rather difficult to achieve, because bands might stain, if the applications are not regular.

Reusing the study, I move to the painting of both portraits, following the same choices of color and contrast, but in a smaller size. The portraits are almost identical, no issue while executing.

I paint the scene like I did on the first version, of which I wanted to keep the principle of a 2-color tones, from of Siena to pale gray-blue. With these two colors, I paint the rows of trees along the avenue.

I finish with the dark clothing:

Logo "XIII" and the title of this episode are composed by computer, Happy new year to everyone!